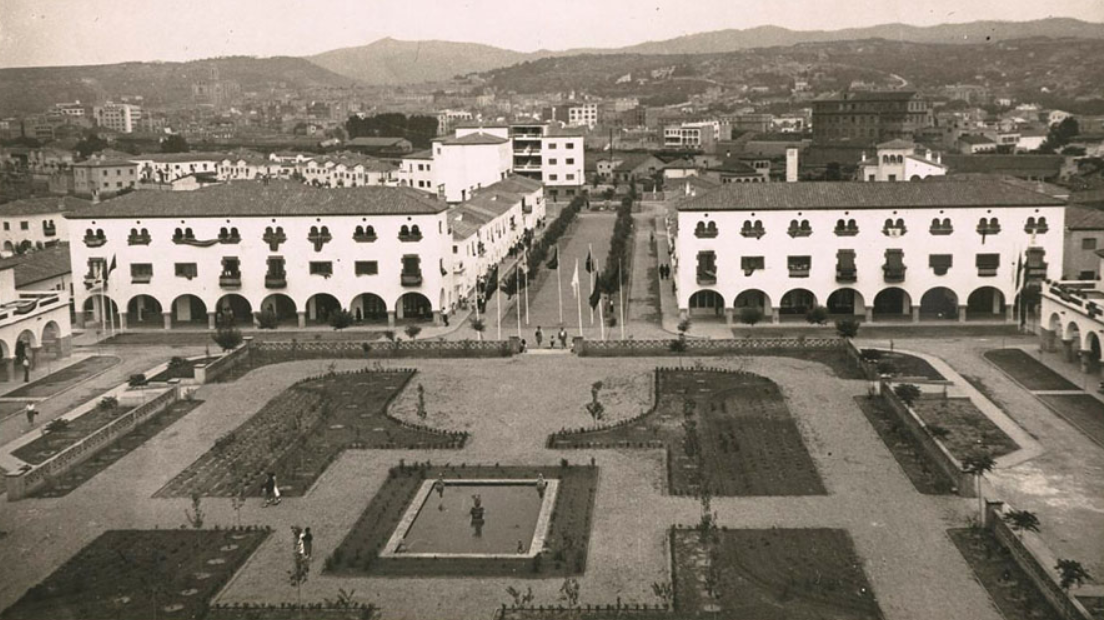 Today we want to explain a little about the history of our neighborhood, Sant Narcís.

Formerly, the area where the neighborhood is currently located was a dividing space dedicated to agriculture, between Girona and Santa Eugènia de Ter. In times of warlike confrontations it was abandoned and served as a lodging for troops. For example, during the War of the Reapers (1640-1652), Felipe IV’s troops constantly crossed the orchards in the area and entered Girona.

In 1948 the construction of the houses began on the land that currently forms the Sant Narcís neighborhood. A few years earlier, in 1940, there had been flooding in the area and it was decided that the neighborhood had to be built.

The architect Ignasi Bosch i Reitg was in charge of designing the project. It was inspired by the rationalism of Berlin’s social housing (in German, Siedlungen der Berliner Moderne). These German houses were built at a time (1910-1933) when Berlin was considered a socially, politically and culturally progressive city and they have been inscribed on the UNESCO World Heritage list since 2008.

Thus, the architect designed a project that, despite being inspired by those German buildings, would retain a certain Catalan tradition. The housing complex follows a garden city model, since Bosch considered it important that the neighborhood had a rural air, avoiding the overcrowding and crowding that existed in the city. The project was called “Group of housing of the San Narciso Home Sindical Work” and was designed in 1944, although the works would not begin until 1948 due to the difficulties in the appropriation process.

Therefore, we find a cozy neighborhood, with low-rise houses and, some, with an independent garden, with open spaces, gardens and trees. The urban complex is located around a porticoed square named “Plaça de l’Assumpció”, which, according to the architect’s project, would concentrate the part of the neighborhood services: church, social center, parish center and professional training school. Currently, as you may already know, we also find entities and businesses such as the Bar Sant Narcís, Ohana Salut,  La Volta, el celler de Sant Narcís, la peixateria Puignau…

In the first phase, the two-storey houses with independent gardens were built. Later, four-story buildings would be built. The houses have a load-bearing wall structure with four-point vaulted roofs. The exterior is plastered and painted and the roof is usually made of Arabic tile. The whole of the neighborhood is well defined and differs from the rest of the city of Girona.

On July 18th, 1951, the Sant Narcís neighborhood was inaugurated, although the official inauguration would not be until February 1952. Finally, the neighborhood consisted of 527 homes that were first awarded to people who were unionized with the Obra Sindical del Hogar. Subsequently, the simplest dwellings were awarded to the working classes.

The initial set of houses constitutes a significant sample of the housing policy that was carried out by the Obra Sindical del Hogar during the postwar period.

Currently, Sant Narcís is a neighborhood full of life, with a quiet atmosphere, where various community activities are carried out in which neighbors tend to get involved. For example, we have the “Menja’t Sant Narcís, Barri Comestible” project that we were talking about a few days ago. Also, before the pandemic, we organized solidarity markets, musical performances…

We love being part of the Sant Narcís neighborhood. It is ideal for our SlowTravel concept, located outside the most touristic part of the city, a neighborhood where village life is lived and where all the neighbors know each other. A place where life seems to be slower, where the shops are all owned by local owners. We think that it is the ideal neighborhood for the traveler to immerse himself in the Girona culture and not feel like just another “invader” of the city, but part of it.